With all that man now knows about the Earth and about himself, he knows very little!

Astrological Ages are based on the precession of the equinoxes and last roughly 2000 years each. Each new Age brings in challenges, opportunities and energies quite distinct from the one before it. Moreover, a larger cycle of 12 Astrological Ages is concluding simultaneously, a period of 25, 800 years. To be on Earth at such a time is momentous! When the Mayan Astronomer/Astrologers’ Calendar ended it did not predict the end of the world as is commonly believed; rather, it signifies the end of the world as we have known it for untold millennium.

That mankind is a part of an immense expanse of planets, stars and celestial spheres has been known since men could look up and see the skies! In the Bible we read several accounts of Angels and heavenly beings interacting with men on Earth.
Astrology is based on the maxim, “As above, so below.” What has been called the heaven world, the 5th dimension, the Etheric Plane, the Cosmos, is a world within itself. Its properties are echoed here on Earth, within man, in his relationships, and within every cell and atom of his being. A natal chart is a snapshot, as it were, of the exact moment of birth, when the interplay of celestial influences together provide that soul with the greatest possible opportunity to fulfill her destiny and to balance her karma!

Once it was believed that the Sun and the planetary spheres revolved around the Earth. In the 16th century, when Copernicus proved otherwise, that the Earth and other planets revolve around the Sun, he and his students were deemed dangerous. Why? Because to change man’s understanding of Cosmos ultimately changes his concept of himself. His treatise was called “A Revolution on the Heavenly Spheres.” Every facet of life was affected by this major shift in thinking. In Aquarius, man’s understanding of Cosmos will change once more, dramatically so! Now, at the dawn of the Age of Aquarius, brings us to another watershed in Cosmology.

To contemplate the Solar System, its celestial planets and orbs, the Galaxy, the Universe and beyond is to touch the hem of the great mystery of all time; the relationship of the Creator to the Creation and specifically to man. The Mayan astronomers/astrologers spoke of the Womb of the Cosmic Mother, a seemingly primitive phraseology. Nevertheless, when the Galactic Center was identified in 1918 , it was later seen that the Mayan calculations were within a 1/2 degree of exactitude centuries before. Behind the physical Galactic Center is what esoterically has been called The Great Central Sun. From the Great Central Sun and the consciousness ensouling it are emanated waves of possibilities in cyclic measures, the heartbeat of a Cosmos.

The celestial orbs have each one its own unique history in the tapestry of time. Like man, each planet has its positive and negative potential. The Earth itself and all its inhabitants share a unique destiny. As the Universe evolves, so do we. We are affected by the planets according to our karma, for good or for evil. In transcending these influences, we transcend our lower ego selves. In this regard, the planets can be seen as vehicles for Cosmic initiation.

During the Middle Ages Astronomy and Astrology were intertwined; in many lands, to practice medicine meant to be an astrologer as well. An argument never fully resolved in the Middle Ages, which itself began eons before, was picked up again during the Industrial Revolution. In an Age of extreme Reason, religion and science were divorced, but in the Aquarian Age they enjoy a reunion as metaphysics will be seen to be the science of spiritual causes behind physics, the study of the physical Universe.

As is true of many sciences, Astrology has a mundane and a more mystical side. A thousand years ago, someone might visit the astrologer seeking advice on buying a new camel. Today the question more likely relates to ascertaining the best time to buy a new car at the best price, This is valid. We live in time and space. But Astrology, called by the famous Swiss psychologist Carl Jung, the psychology of the ancients, has a deeper meaning and purpose. The astrologer, illumined by the Spirit, helps define the cycles of becoming, the options at hand, the blueprint of karma and destiny, the factors to consider, potential outcomes, the timing and nature of choices.

If you were born, let’s say, August 11th, when the Sun was passing through Leo on the 360 degree spectrum, not only will you out picture Leo qualities, such as a dramatic personality and a natural call to leadership, but you will be tried by your own and/or planetary karma related to Leo. Leo deals with the development of the Soul and the Soul Chakra. Leo is a Fire Sign on the fixed/love cross. Leos can be blinded by pride, they take much for granted, they like to rule but not to obey. But all this is for the development of the heart, the purging of the Soul, the blossoming of love within the individual. The Leo leader emanates so much light that he sometimes becomes blinded by the brilliance of the Sun within him and thereby vulnerable to hubris, the ancient word for pride. Pride comes before the fall! A classic example in history is Napoleon Bonaparte, whose life became the stuff of legends, but whose aggrandizement became so great that he inevitably met his Waterloo. The Leo individual is advised to stay humble lest he be humiliated.

In the Age of Aquarius that which was in ages past the election of the select few, those who followed a road of discipleship, will become the rite of passage for the many. At the initiatic level, Astrology becomes more than a road map of karma and a laboratory for understanding psychology, it outlines the cycles, meanings and challenges in the many tests of which the Spiritual Path is compromised.

We place the beginning of the Aquarian Age circa 2010. We recognize the previous 12 year cycle as a period of transition, the passing of the torch from the Piscean Age to that of Aquarius. How can those born in Pisces transform into men and women of Aquarius, the Age of Brotherly Love? How can they train their children so unlike themselves? How can the Earth survive the predicted changes? To answer these questions and more, to assist each one on the many steps comprising the journey of life and love, The Three Magi presents Transformational Astrology for the Aquarian Age. 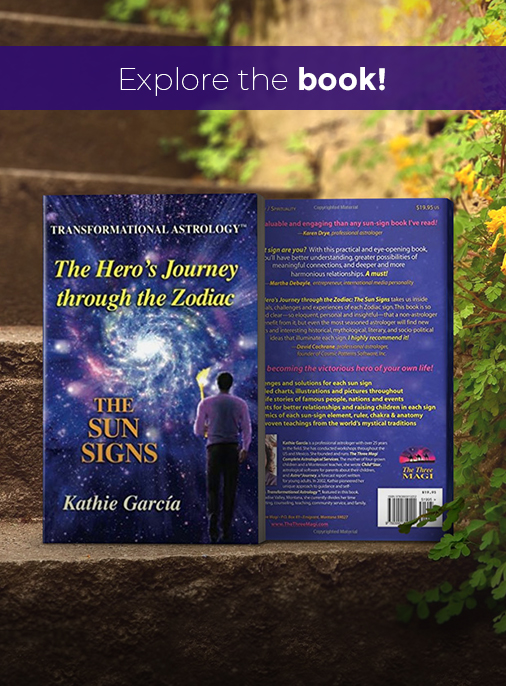